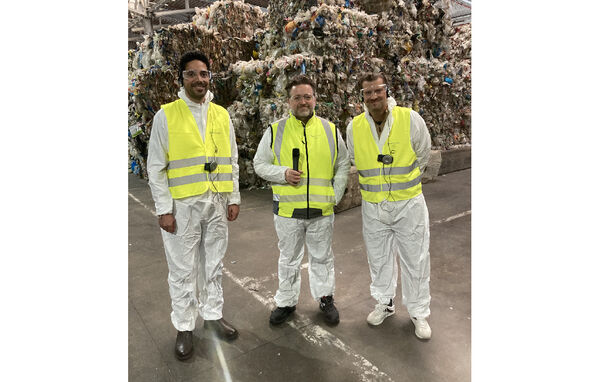 Film waste, collected in Germany in the yellow bag and the yellow garbage can, is not waste, but valuable raw materials. At least, that's what people at Systec Plastics Eisfeld in Thuringia are convinced of. Every year, the plant produces around 28,000 tons of new Systalen® brand plastic from packaging films that have been collected separately from German households. And an ever-increasing proportion of this is then reused in new films.

Danone employees learned about the process during a visit to the plant. Danone, one of the world's largest food manufacturers, has set itself ambitious targets for the recyclability of its packaging and the use of recyclates. Processes like the one at Systec Plastics Eisfeld can help decisively, even if the resulting recyclates may not be used for food contact packaging.

Caption: Thorsten Weber (center) from Green Dot gave Michael Stumpf (right) and his colleague from Danone Germany a tour of the plant.