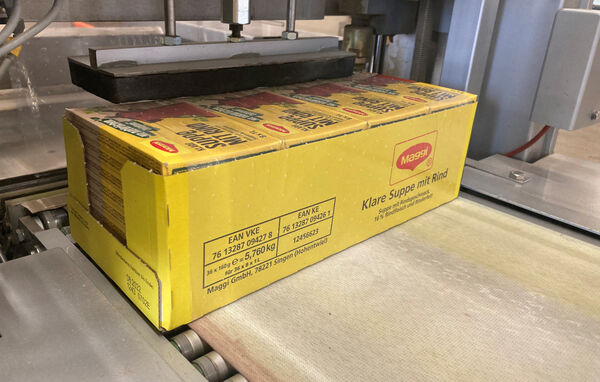 Cologne, 21 September 2021. Breakthrough in the recycling of film waste from the German Yellow Sack: In a joint project, the companies Nestlé Deutschland AG, Papier-Mettler KG and Der Grüne Punkt have developed a new type of shrink film made of low-density polyethelene (LDPE) that contains about 50 % recyclate, obtained in part from plastic waste collected in the Yellow Sack or Yellow Bin. This post-consumer recyclate (PCR) is regarded as particularly difficult to re-use in the production of new films.

Jörg Deppmeyer, Managing Director of Der Grüne Punkt, is delighted about yet another pioneering achievement of the company: “Technical innovations have enabled us to successfully produce a particularly pure Systalen® LDPE recyclate that can be used to make new film. What was once film is turned back into film, old packaging turned into new packaging. Together with our partners, we are now exploring large-scale applications for this new product. That represents a breakthrough in the recycling of film waste from the Yellow Sack.”

The Maggi plant in Singen in southern Germany uses the shrink films made in part of Systalen® LDPE and produced by Papier-Mettler KG to seal Maggi trays for transit. Further applications are possible and are currently under preparation. “We have committed ourselves to reducing the use of virgin plastics by one third by 2025,” to quote Tim Jünemann, Nestlé Deutschland AG. “In order to create closed loops, we intend to use an increasing quantity of plastic recyclate obtained from packaging waste. This constitutes a particular challenge in the field of film packaging, and so the project we successfully completed together with Papier-Mettler and Der Grüne Punkt is a major milestone for us.”

Well-functioning cycles for hard plastics from packaging waste already exist, whereas the recycling of films still has a lot of catching up to do. Recyclate obtained from films is re-used in relatively simple products but not usually in new films. The European Union is continuously increasing its requirements for recycling plastic waste. The German Packaging Act stipulates a recycling quota of 63 percent for all plastic packaging in the dual system as from 2022. These requirements can hardly be met without any significant progress in the recycling of film waste, which accounts for the lion’s share of the quantities collected.

Systalen® LDPE recyclate is produced in Thuringia at Systec Plastics Eisfeld GmbH. The company is a member in the “RAL-Gütegemeinschaft Rezyklate aus haushaltsnahen Wertstoffsammlungen e.V.” (RAL Quality Assurance Association for Recyclates from Close-to-Home Recyclables Collections) – The RAL quality mark “% recycled plastic” enables any PCRs used to be traced, thus certifying they originally came from the Yellow Sack or Yellow Bin. “Our Systalen® offers significant advantages for the natural environment and closes the used-film-to-new-film cycle in a verifiable form,” sums up Jörg Deppmeyer.

About the Der Grüne Punkt Group:

The companies of Der Grüne Punkt are service providers for extended producer responsibility, leading suppliers of secondary raw materials for plastics, and premium producers of plastic recyclates, and as such positioned as the premier solution providers for the needs of the circular economy. Der Grüne Punkt – Duales System Deutschland GmbH (DSD), with the Green Dot as its trademark, was among the companies to introduce and establish the dual system in Germany, and stands for intelligent take-back systems, plus the development and marketing of innovative recyclates and services. Systec Plastics, at its facilities in Eisfeld and Hörstel, produces premium-quality recyclates under the Systalen brand name for the international market. The companies are grouped together in DSD – Duales System Holding GmbH & Co. KG.