By establishing Der Grüne Punkt and the dual system for collecting and recovering packaging waste, a maximally interdependent system for plastics recycling was created in the early 1990s.

A comprehensive study of the dual system from an economic perspective is conditional upon an accurate picture of the relational interactions and causal interdependences obtaining in the overall system employed for plastics recycling. This is because here (even more emphatically than in other sectors of the economy) developmental advances are always dependent on the statutory situational conditions and market trends involved.

This is why the RWI's study began by using the results of the interviews with experts to create an overall model of plastics recycling. This model images the interdependences of the protagonists involved, and the role of the relevant markets, and maps out the influence of various determinants like technological and market developments.

This not only enables the influence of the dual systems on the development of plastics recycling since 1990 to be estimated, but also makes it easier to identify the anticipated developments of the future, to answer the question of how ongoing developments will affect the progress of the sector, and to define the conditions under which plastics recycling can be advanced to optimum effect.

Where does plastics recycling in Germany stand today, and what are the most recent developments signposting? In order to answer this question, the RWI has examined the specific economic benefits of the dual system and is estimating the future development of the market for plastic recyclates on the basis of four scenarios.

In Germany, a fully functional market for secondary raw materials is already in place – the dual system has made a crucial contribution here.

After an initial start-up phase following the introduction of the dual system in 1990, a smoothly functioning market for products made from post-consumer waste has developed in Germany, particularly after 2000. The paramount influencing factors here were technical advances in sorting equipment, especially the introduction of automated separation, which has led to substantially improved efficiency and higher sorting purity. In addition, vital impetus has been imparted by the quotas for material recycling stipulated in the relevant legislation, by the opening up of the dual system to competition as from 2003, and the continuingly rising levels of acceptance for recycled products among companies and private consumers.

Thanks to the technological advances, the quality of post-consumer recyclates has been upgraded, and the pricing gap to secondary plastics from the post-industrial category has increasingly been closed. In comparison to primary plastics, too, the price differential for recyclates from the post-consumer category has been reduced by higher quality, better sales channels, and higher quantitative availability. The market for recycled products made from post-consumer lightweight packages (plastic, aluminum, tinplate) nowadays has an estimated volume of approximately 315 million euros.

The economic benefits of the dual system today significantly exceed its costs.

In order to quantify the dual system's economic benefits, the RWI has identified the relevant benefit and cost factors involved. The focus here is on recycling post-consumer lightweight packages. The basic assumption behind the calculations is the premise that the lightweight packages collected in the Yellow Bin or the Yellow Sack would have remained in residual waste without the introduction of the dual system.

In 2014, the net economic benefits of the dual system came to around 185 million euros. These benefits can be broken down as follows:

Market for regranulates made from lightweight packages

Thanks to the dual system, and the plastic regranulates made from lightweight packages it has put into circulation, there have been savings in terms of aluminum, tinplate, and primary
materials. The economic benefits from savings that reflect the price differential between primary and secondary raw materials come to approximately 180 million euros.

In addition, the dual system makes a contribution towards security of supply, since this means reduced dependence on primary materials, which frequently have to be imported.

Thanks to the dual system, a total of 2.72 million tons of CO2 equivalents are saved each year – this corresponds to the quantity of greenhouse gases emitted in one year by almost 750,000 compact-class cars. The quantity of CO2 thus saved is calculated at an average of German Renewable Energies Act avoidance costs quantified at about 85 euros per ton of CO2 equivalents, in order to determine the economic benefits of around 230 million euros. The CO2 avoidance costs of the dual system are exceptionally low, at 17 euros per ton of CO2 saved. Other studies*, for example, have quantified the CO2 avoidance costs per ton due to expanding the use of regenerative energy sources in the framework of the German Renewable Energies Act at 85 euros. In a comparative study conducted in 2014, the German Federal Environmental Agency determined average costs of 77 euros per ton of CO2 saved.

Incineration with energy recovery as a substitute fuel

In the recycling sector, approximately 10,000 jobs have been created. The jobs thus saved at primary production facilities relate predominantly to foreign countries. This factor has not been converted into a specifically quantified benefit.

The total benefits of the dual system in the lightweight packaging category add up to approximately 960 million euros, while the system costs come to about 775 million euros. Thus at present the benefits of the dual system exceed the concomitant costs by about 185 million euros. While the system's economic benefits have steadily increased over the course of time, the system costs have progressively fallen, thanks to technical advances and the introduction of competition. Thus over the course of time efficiency has been upgraded and the cost-benefit ratio has consequently become more favorable.

Favorable market conditions for recyclates are foreseeable due to the steadily growing levels of acceptance for products and packages made of secondary raw materials and the continually rising quality of the recyclates involved. Flagship projects – frequently involving explicit initiatives by protagonists from the private sector – show that a market for premium recyclates can emerge. These projects play an important role as door openers.

Nevertheless there are still some considerable opportunities for optimization, since the current situational conditions for plastics recycling are preventing the existing potentials from being tapped or precluding this possibility. Disincen-tives, for instance, are leading to reduced recyclability of packaging and to a lower quality of the input materials for recycling. In particular, the recycling quotas currently in force are not high enough to constitute an incentive for exhausting the potentials of existing technology. 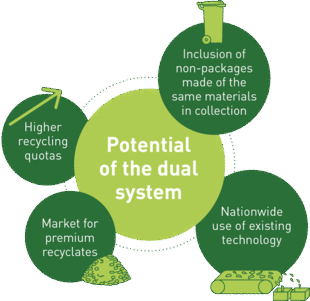 For years, moreover, due to the ongoing political discussions regarding future regulatory situational conditions, there has been significant uncertainty – and consequently a veritable backlog in terms of capital investment in recycling facilities. These investments, however, would be essential in order to utilize to the full the existing potentials of the dual system and open up new markets on a sustainable basis. Relevant technologies for improving the sorting and recycling of post-consumer lightweight packages are already available, and very largely mature.